The evening’s auction, hosted by renowned charity auctioneer Charlie Ross, together with a film detailing the challenges faced by the charity’s special guests, helped to raise over £1.6 million for the charity, founded by the entrepreneur and philanthropist, John Caudwell. 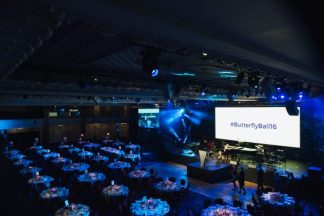 With the Caudwell Children Committee headed up by Sunseeker London’s Alexis Lewis, clients from Sunseeker London attended the gala in support of this incredibly worthy cause. Joan Collins, Lindsay Lohan, Natalie Anderson (Emmerdale) and award winning actor Dean Andrews (Life on Mars, Last Tango in Halifax), were also among the guests at this glitzy event.

The ball was headlined by Burt Bacharach, the legendary six-time Grammy and two-time Academy Award winning songwriter. The all–girl group All Saints and singer Gabrielle also entertained guests on the night as well as the singer, model, presenter and Caudwell Children Ambassador Rachel Stevens and singer Simon Webbe.

The party carried on into the small hours with an after-show party in the hotel’s Red Bar, which featured a DJ set from the legendary Trevor Nelson of BBC Radio 1 and BBC Radio 1 Extra Fame.

Caudwell Children Charity Chief Executive Trudi Beswick, said: “We are delighted at the overwhelming support we received from all of our guests on the night. This money is more important than ever as the demand for our support increases. This will enable us to touch the lives of thousands of children. I can’t thank everyone who donated tonight enough.”

Alexis Lewis commented: “Sunseeker London have supported John and his wonderful charity Caudwell Children for many years. The tireless months of organisation are worth every minute when you see the amount raised. The guests of honour this year were six young people who have benefited from the charity; Antonia Payne-Cheney (18), Dylan Kelsall (13), Hollie Williams (10), Keely Cullen (17), Keavy O’Mahoney (17) and Tim Wagter (13), all received VIP treatment at Caudwell Children’s flagship, fundraising event.”

David Lewis, Group Managing Director at Sunseeker London concluded: “It has been another extraordinary event for Caudwell Children which we are so thrilled to support. Philanthropy has always been a pivotal part of our business and it is a privilege to help where one can to change these wonderful young lives for the better”